If you are looking for general documentation for Checkinera head over here.

If you want to learn how to customize the Android Checkinera app follow this link.

Source code for the iOS version of Checkinera will allow you to modify the app to certain extent and, more importantly, to deploy it as your own to the Apple App Store. So, let's see what is required and how do you go about this.

To be able to edit this source code, you will need a software named Xcode IDE. This software is free and can be downloaded and installed directly from the Apple App Store here. However, it can only run on Apple Mac computers so you won't be able to edit the source code on Windows, Linux nor any other machine apart from the Apple Macs. Granted, there are some alternatives (some of them are explained here) but we haven't tested any of these so we cannot vouch whether this will work and how efficient so in this documentation we will focus strictly on editing of the source code using Xcode on Apple Mac computers.

First, you will need to download source code for the iOS version of Checkinera here. Once downloaded, unpack it on your computer and you should now have a folder named Checkinera. Inside this folder, you will find a file named Checkinera.xcodeproj which you can simply double-click to open. This will automatically open the project in Xcode, provided that you have previously installed it.

There are several ways of doing this but by far the simplest one is to select the Checkinera project on the left (1), then click General tab (2) and then enter your desired app name to the Display Name field (3). Also, you will have to change the bundle identifier as, by default, this one is used for our official Checkinera app, that is released to Apple App Store. So, you will have to use bundle identifier, specific for your app. To avoid conflicts, we suggest you to use reverse domain name notation for your app's bundle identifier. 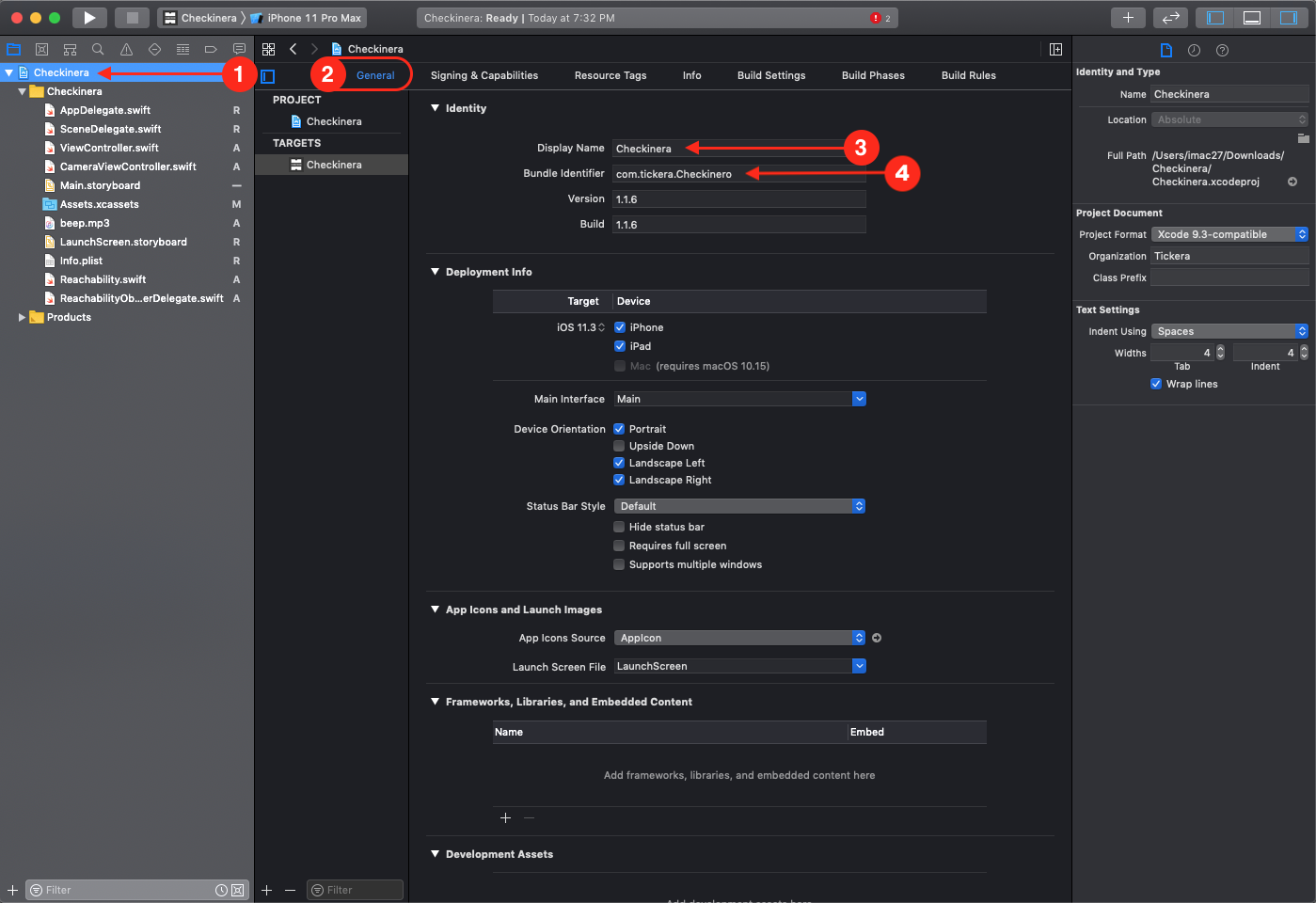 To change the app icon, expand Checkinera folder in the menu on the left, then select Assets.xcassets and then click AppIcon. This will reveal current icons used for the app and you will be able to change the icons from there simply by dragging your new icons on top of the existing ones (see the video below).

To change the icon used on the app start (splash screen), select Assets.xcassets (1) and then click Checkin_icon_1024 (2) which will reveal the three icon set and where you should then select icons you would like to use sized 1024 x 1024 pixels (3). 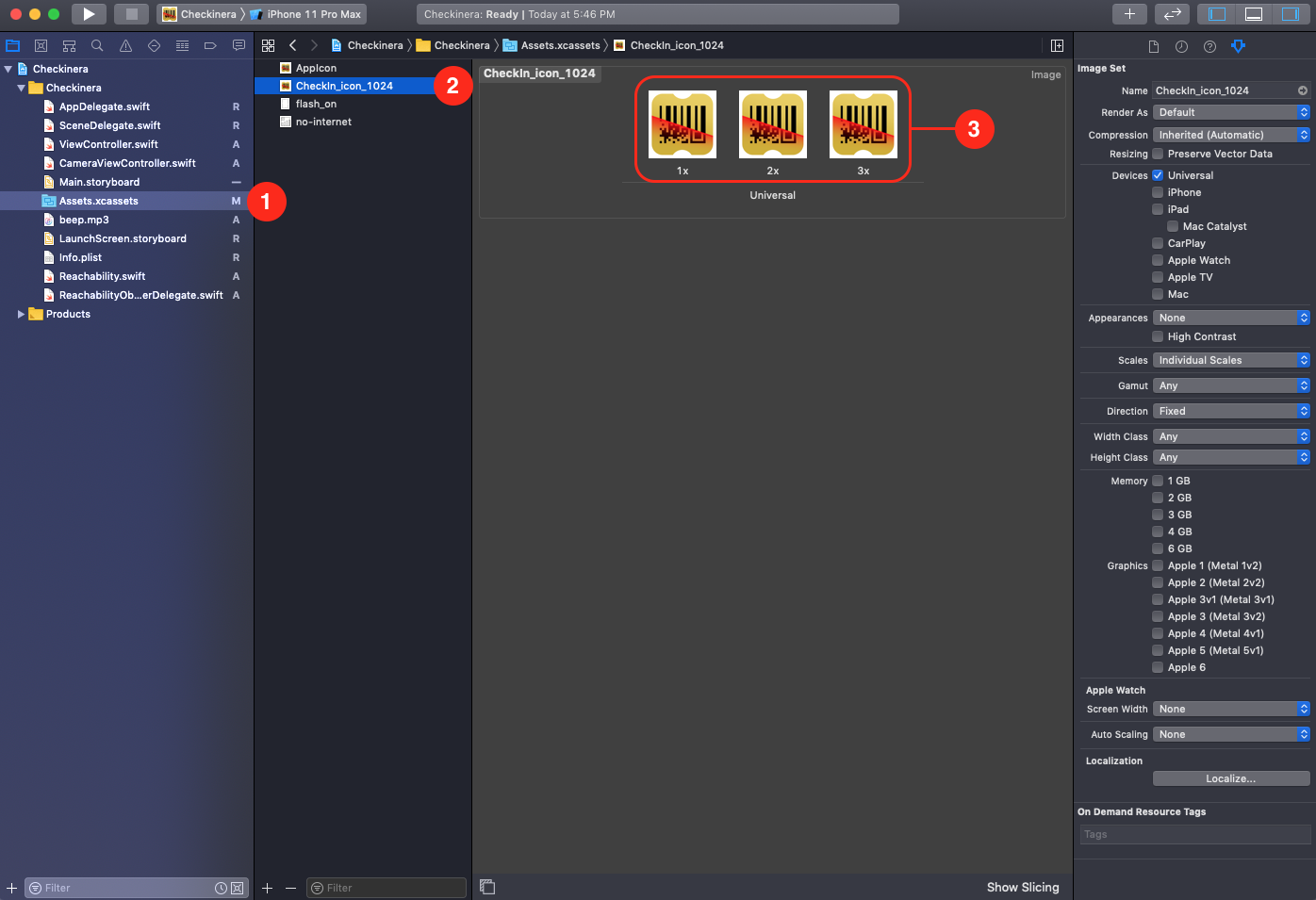 Before explaining how to do this, let's first quickly explain the reason why you would want to do this.

So, for this to have any effect on your app, you would need to install Checkinera plugin that you can download from your Tickera account. This plugin will allow you to place [tc_checkin] shortcode to any of your pages or posts in which case this page will automatically become a web interface for checking the tickets in and will act basically the same as any other Check-in app. Now, when you change the URL within the app and point it to this exact page, the app will basically use this page for checking the tickets in. This means that communication between your Check-in app will be exclusively tied to that exact URL.

To change the URL to which Checkinera will point, you should select ViewController.swift on the left which will then load this file the edit window in the middle. While editing, find a line that contains the following:

...and within this line you can change the existing https://checkinera.com to the URL where you want to point the app. Just remember not to alter anything else but the URL. So, everything around this URL must stay unchanged or the app won't work properly. 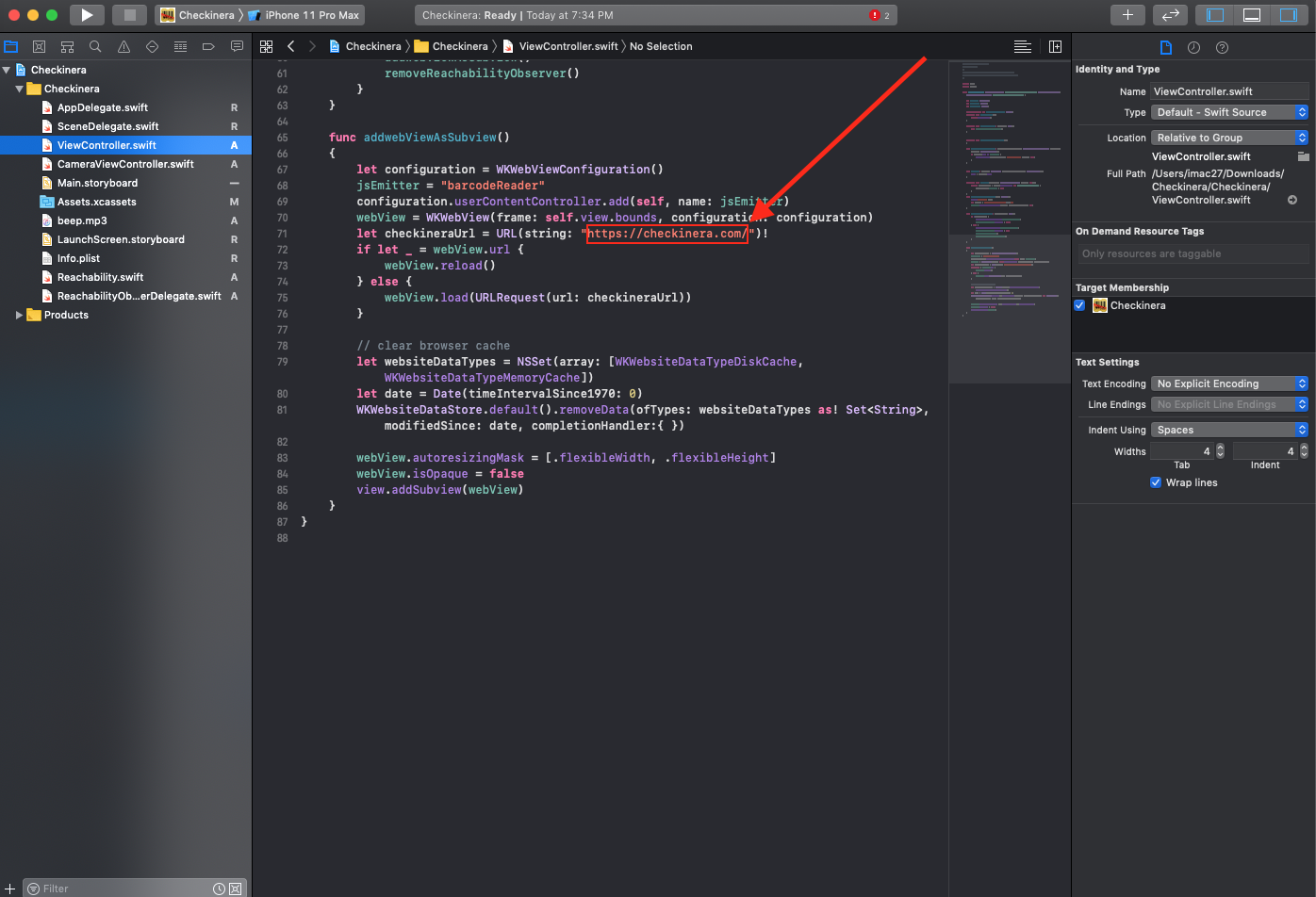 - Once you've made all the changes you wanted, you should first prepare your app for deployment and the useful guide on how to do this can be found here.

- After you have prepared the app for deployment, you should then follow the guide on publishing the app to the Apple App Store which can be found here.

Leave Us A Message!